There are few cricket clubs in the world that can boast the modern day premiership tally of the Mount Eliza Cricket Club. Since 1958/59, the Mounties have won a staggering 53 senior and 20 junior flags. In the beginning, the Club fielded two sides in the Northern Peninsula Grade of the Mornington Peninsula Cricket Association (MPCA), adding to initial success in 58/59, with Senior flags again in 62/63 and 66/67. Today, the Premiers Club celebrates the collective achievement of the over 400 players, 12th men and officials who, combined, were indispensable in each of their successful premiership campaigns.

The Premiers Club affords a forum where modern day champions can, for a moment, stand alongside Johnny Burke, the legendary fast bowler of the 50’s, who served the Club and the MPCA with distinction before being taken tragically early in a car accident.

The Premiers Club showcases the magical spin of the “Macs”, McKenzie, McCue and McDonald, and the brilliance of glovemen Littlechild, Kruger, Brennan, Carson and Pearson. Echoes of the past invoke friendly argument as to who was the better premiership all-rounder, Wallens, Brammall, or Hogan;  the most terrifying of Riall, McWilliams or Smale; the most devastating of the finals winning feats of Wedgwood, Munday, Clarkson, Zimmerman, Treacy, Fuhrmann, and Strickland. One point none will argue is that Brian Brimmell was peerless when it came to roaming the covers; or would they? Is Justin Grant his equal?

It is the depth of the premiership success that remains the Premiers Club’s main focus, with no distinction drawn between flags, be they firsts, ninths or juniors. Every victory is a classic. John Lyle heads the table with 14 Premiership wins to his name, Tony McWilliams is next on 12, John Crump follows with 11, and Brian Brimmell, Phil Charlton, Anthony Starkins and Wally Wedgwood Junior have 10. Phil Charlton’s winning span of 43 years (his first flag was 66/67 and his last 2009/10) is a Club record which may prove very hard to beat! 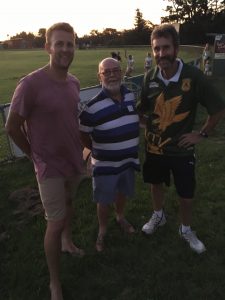 At our 2016 Heritage Club event we had present our last three 1st X1 Premiership Captains.